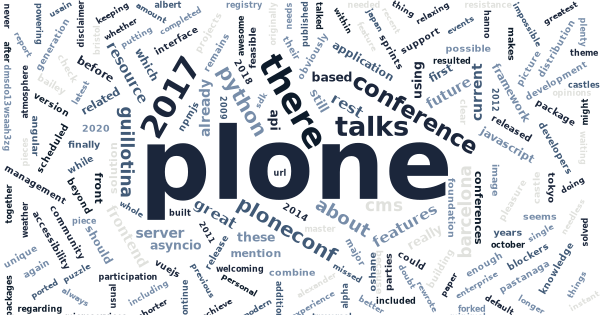 It was awesome to be back at Plone Conference this year. Finally! We have had participation in Plone conferences in 2009, 2011–2012 and 2014–2017, but for me the previous one was years ago: Plone Conference Bristol in 2014. Needless to say that I have missed the warm and welcoming atmosphere of a Plone conferences, and It’s my pleasure to report that Barcelona did not let me down. Even the weather was still warm there in this October.

This year there was no single big Plone news at the conference. The latest major release of Plone CMS was released already two years ago, and the next feature release is still waiting for its gold master. Yet, there was still a lot of good news, and putting all the puzzle pieces together resulted in a clear picture of the future of Plone.

Disclaimer: These are obviously just my personal opinions on all these things Plone… 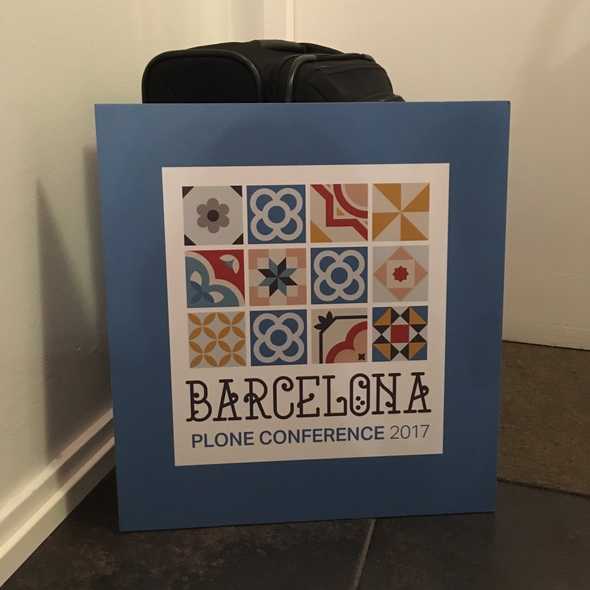 Plone Conference Barcelona was so much of fun that I took a piece of it with me back home.

At first, let’s say it clear that Plone CMS remains to be a safe bet for a long-term enterprise CMS solution. If there ever was any doubt, whether Plone could make it to Python 3 in-time before the end of Python 2.7 maintenance in 2020, that should be no more. Plone will make it.

All the major blockers seem to have been solved, and the rest is just hard work left for our community (check some related talks by Alexander and Hanno about the recent events on that). Python 3 version of Zope application server powering Plone is already in beta, and it is scheduled to be released within a year. Plone, for sure, has still plenty of packages to be ported from Python 2.7 to Python 3, but there are already many sprints scheduled to continue that work in near future (including the already completed Barcelona Conference sprints). We might even have an alpha version of Plone on Python 3 before end of 2018.

In addition that, it’s always good to mention, that Plone Foundation has continued to do its usual great job in all the possible paper work around managing Plone’s copyrights and trademarks.

All these should be good and relaxing news for any long-term Plone user.

The greatest challenge for Plone CMS seems to be keeping up with the ever increasing UX expections of the day, while complying with the high accessibility standards. After Plone 5 rewrote the default theme and whole front-end resource management in Plone, there are no longer blockers for using any current front-end tech with Plone. But just being able to use some tech is not enough — also the real work for better UX needs to be done. And even a lot has been done for Plone 5 and 5.1, that work seems to never end.

Plone Conference Barcelona included a great amount of front-end, user experience and accessibility related talks to educate our community. So many that I can only mention a few.

At first, there were talks regarding the current Plone user interface: Johannes gave a bit technical, but very comprehensive talk how the new frontend resource registries in Plone 5 really work. My talk instructed, how to combine the ancient powers of Zope application server with the modern Plone 5 theming support to achieve shorter iterations and faster deployments when developing new UX features. Our Rikupekka talked about our migration experiences from Plone 4 to Plone 5, and gave a demo about of the UI features we have developed using the approach I discussed in my talk. Finally, I want to mention Wildcards’ Kim’s talk about Castle CMS, which really showcased, how much difference well lead and focused UX development for Plone based distribution could do in just about a year. Although, the fact that Castle’s development had to be forked a bit from the main Plone distribution is also telling, how difficult it is to make the same UX please everyone.

Then there were many talks about the future: there’s a new branch of Plone user interfaces built completely in JavaScript on top of the great Plone REST API (which Timo gave a nice presentation about). With Plone REST API it’s possible to combine the great and robust CMS features of our secure Plone backend with leading edge JavaScript based frontend. It also makes Plone based solutions feasible for the current generation of frontend developers, because only very basic Plone knowledge is needed to get started. And while there is no complete replacement of Plone user interface in JavaScript yet, there are SDK like projects with many familiar UI components already for ReactJS, Angular (check Eric’s talk) and even on VueJS.

If these don’t feel ambitious enough, there was one more thing: Albert’s talk about Pastanaga UI — a proposal for next generation UI for generic CMSs.

I’m not sure how common mistake it is, but at least we have sometimes ended up using Plone as a framework for projects, for which Plone was not really the most optimal solution. That has happened, because Plone has some very unique features we love and trust: object database with URL traversal, extremely flexible Zope Component Architecture, and very proven security model especially designed for hierarchical data.

At Barcelona conference, Nathan from Onna presented their new “AsyncIO REST Resource Application Server” called Guillotina (open sourced through Plone Foundation)r What makes Guillotina very special and interesting is that it has all those unique features we have learned to love in Plone “framework”, but with minimal server footprint and first class support for asynchronous programming using Python 3 AsyncIO event loop. That should allow Guillotina to go places where no Plone has gone before.

There and back again

To summarize all this, here’s my picture of the future of Plone on the base of Plone Conference Barcelona 2017 in three sentences:

Obviously there was a lot more in the conference than this. There was a lot of great talks by talented speakers. It was great to see all the old friends and make some new ones. I had a chance to meet my GSOC 2017 student Oshane Bailey. And there are no parties like parties in Plone Conferences.

Thanks once again for all the organizers. It was a pleasure to be there.

We’ll see if I get to see Tokyo next year… 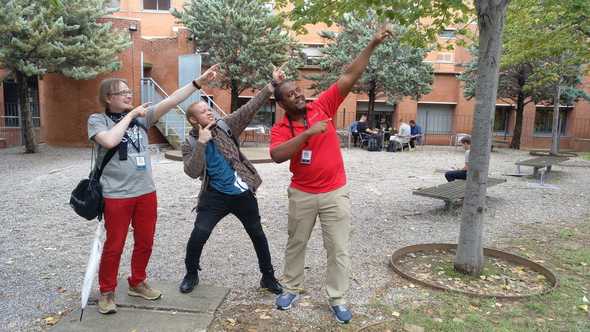 Photo of me, Oshane Bailey and David Bain by Maik Derstappen. They said this pose is to honor Usain Bolt.