On building fat themes for Plone

On building fat themes for Plone 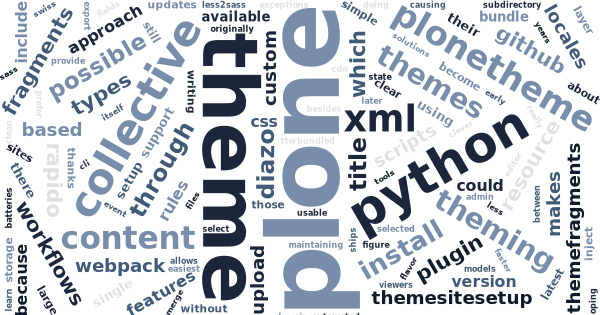 Asko Soukka
Could fat themes become the common ground between filesystem Plone developers and through-the-web integrators? Plone ships with a lot of bundled batteries for…
DiazoPloneRequireJSThemingTTWWebpackhttps://fed.brid.gy/https://fediverse.pandala.org/October 04, 2016

Plone ships with a lot of bundled batteries for building sophisticated content management solutions. Content types, workflows, portlets and event based content rules can all be customized just by using browser without writing a single line of new code. Yet, bad early experiences from maintaining such through-the-web implementations, have made it common to disregard that approach, and prefer (more technical) file system based approach instead.

Initially, I was hoping for some kind of new TTW add-on approach to emerge on top plone.resource. Nowadays it’s getting clear that we are just going add more features into themes instead. Maybe it’s better that way.

By fat themes, I mean themes which do not only provide look, but also some behavior for the site. Most of my such themes have provided all customizable configuration for their sites. The main benefit has been faster iterations, because I’ve been able to deliver updates without running buildout or restarting the site.

Obviously, configuring everything in theme is not yet possible with vanilla Plone, but requires selected theming related add-ons and tools:

collective.themefragments makes it possible to include Zope/Chameleon page template fragments in your theme, and inject them into rendered content using Diazo rules. It was originally proposed as a core feature for Plone theming (by Martin Aspeli), but because it was rejected, I had to to release it as its own add-on. Later I added support for restricted python scripts (callable from those fragments) and a tile to make fragments addable into Plone Mosaic layouts.

Use of themefragments requires the add-on to be available for Plone (e.g. by adding it to eggs in buildout and running the buildout) and writing fragment templates into fragments* subdirectory of theme:

And injecting them in ./rules.xml:

depending on the flavor of your Diazo rules.

It’s good to know that rendering fragments and executing their scripts rely on Zope 2 restricted python, and may cause unexpected Unauthorized exceptions (because you write them as admin, but viewers may be unauthenticated). More than once I’ve needed to set the verbose-security flag to figure out the real reason of causing a such exception…

rapido.plone must be mentioned, even I don’t have it in production yet by myself. Rapido goes beyond just customizing existing features of Plone by making it possible to implement completely new interactive features purely in theme. Rapido is the spiritual successor of Plomino and probably the most powerful add-on out there when it comes to customizing Plone.

When compared to to themefragments, Rapido is more permissive in its scripts (e.g. allows use of plone.api).It also provides its own fast storage layer (Souper) for storing, indexing and accessing custom data.

collective.themesitesetup has become my “Swiss Army knife” for configuring Plone sites from theme. It’s a theming plugin, which imports Generic Setup steps directly from theme, when the theme is being activated. It also includes helper views for exporting the current exportable site configuration into editable theme directories.

This is the theming add-on, which makes it possible to bundle custom content types, workflows, portlets, content rule configurations, registry configuration and other Generic Setup-configurable stuff in a theme.

A theme manifest enabling the plugin (once the plugin is available for Plone) could look like the:

collective.taxonomy is not really a theming plugin, but makes it possible to include large named vocabularies with translations in a Generic Setup profile. That makes it a nice companion to collective.themesitesetup by keeping XML schemas clean from large vocabularies.

collective.dexteritytextindexer is also “just” a normal add-on, but because it adds searchable text indexing support for custom fields of custom content types, it is a mandatory add-on when theme contains new content types.

Of course, the core of any theme is still about CSS and JavaScript to make the site frontend look and feel good. Since Mockup and Plone 5, we’ve had RequireJS based JavaScript modules and bundles for Plone, and LESS based default theme, Barceloneta (with also SASS version available). Unfortunately, thanks to the ever-changing state of JavaScript ecosystem, there’s currently no single correct tool or re-building and customizing these Plone frontend resource.

My current tool of choice for building frontend resources for a Plone theme is Webpack, which (with help of my plugin) makes it possible to bundle (almost) all frontend resources from Plone resource registry into theme, and inject my customizations while doing that. And with a single “publicPath”, setting, the resulting theme could load those bundles from a CDN.

Configuring Webpack is not the easiest thing to learn, and debugging possible bundle build issues could be even harder. Yet, I’ve tried to make it easy to try it out with plonetheme.webpacktemplate mr.bob-template.

It should be clear by now, that even my themes are compatible and customizable with through-the-web* approach, I still work on filesystem with version control and traditional Plone add-on development toolchain (I may even have automated acceptance tests for non-trivial theme features). For a long time, I just configured a global plone.resource-directory in buildout and rsync’d theme updates to servers. It was about time to automate that.

plonetheme-upload is a npm installable NodeJS-package, which provides a simple command line tool for uploading theme directory into Plone using Upload Zip file feature of Plone Theme settings. Its usage is as simple as:

Possibly the next version shoud include another CLI tool, plonetheme-download*, to help also through-the-web themers to keep their themes under version control.