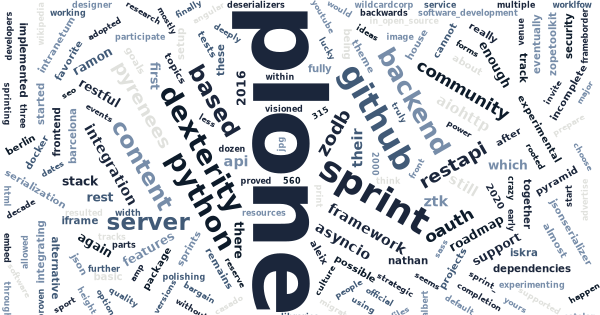 Asko Soukka
For the last week, I was lucky enough to be allowed to participate Plone community sprint at Barcelona. The print was about polishing the new RESTful API for…
AioHttpAsyncDexterityPloneSprintZodbhttps://fed.brid.gy/https://fediverse.pandala.org/May 22, 2016

For the last week, I was lucky enough to be allowed to participate Plone community sprint at Barcelona. The print was about polishing the new RESTful API for Plone, and experimenting with new front end and backend ideas, to prepare Plone for the next decade (as visioned in its roadmap). And once again, the community proved the power of its deeply rooted sprinting culture (adopted from the Zope community in the early 2000).

Just think about this: You need to get some new features for your sophisticated software framework, but you don’t have resources to do it on your own. So, you set up a community sprint: reserve the dates and the venue, choose the topics for the sprint, advertise it or invite the people you want, and get a dozen of experienced developers to enthusiastically work on your topics for more for a full week, mostly at their own cost. It’s a crazy bargain. More than too good to be true. Yet, that’s just what seems to happen in the Plone community, over and over again.

To summarize, the sprint had three tracks: At first there was the completion of plone.restapi — a high quality and fully documented RESTful hypermedia API for all of the currently supported Plone versions. And after this productive sprint, the first official release for that should be out at any time now.

Then there was the research and prototyping of a completely new REST API based user interface for Plone 5 and 6: An extensible Angular 2 based app, which does all its interaction with Plone backend through the new RESTful API, and would universally support both server side and browser side rendering for fast response time, SEO and accessibility. Also these goals were reached, all the major blockers were resolved, and the chosen technologies were proven to be working together. To pick of my favorite sideproduct from that track: Albert Casado, the designer of Plone 5 default theme in LESS, appeared to migrate the theme to SASS.

Finally, there was our small backend moonshot team: Ramon and Aleix from Iskra / Intranetum (Catalonia), Eric from AMP Sport (U.S.), Nathan from Wildcard (U.S.) and yours truly from University of Jyväskylä (Finland). Our goal was to start with an alternative lightweight REST backend for the new experimental frontend, re-using the best parts of the current Plone stack when possible. Eventually, to meet our goals within the given time constraints, we agreed on the following stack: aiohttp based HTTP server, the Plone Dexterity content-type framework (without any HTML views or forms) built around Zope Toolkit, and ZODB as our database, all on Python 3.5 or greater. Yet, Pyramid remains as a possible alternative for ZTK later.

I was responsible for preparing the backend track in advance, and got us started with a a simple aiohttp based HTTP backend with experimental ZODB connection supporting multiple concurrent transaction (when handled with care). Most of my actual sprint time went into upgrading Plone Dexterity content-type framework (and its tests) to support Python 3.5. That also resulted in backwards compatible fixes and pull requests for Python 3.5 support for all its dependencies in plone.* namespace.

Ramon took the lead in integrating ZTK into the new backend, implemented a content-negotiation and content-language aware traversal, and kept us motivated by rising the sprint goal once features started clicking together. Aleix implemented an example docker-compose -setup for everything being developd at the sprint, and open-sourced their in-house OAuth-server as plone.oauth. Nathan worked originally in the frontend-team, but joined us for the last third of the sprint for pytest-based test setup and asyncio-integrated Elasticsearch integration. Eric replaced Zope2-remains in our Dexterity fork with ZTK equivalents, and researched all the available options in integrating content serialization of plone.restapi into our independent backend, eventually leading into a new package called plone.jsonserializer.

The status of our backend experiment after the sprint? Surprisingly good. We got far enough, that it’s almost easier to point the missing and incomplete pieces that still remain on our to do:

So, that was a lot of checkbox ticked in a single sprint, really something to be proud of. And if not enough, an overlapping Plone sprint at Berlin got Python 3.5 upgrades of our stack even further, my favorite result being a helper tool for migrating Python 2 version ZODB databases to Python 3. These two sprints really transformed the nearing end-of-life of Python 2 from a threat into a possibility for our communitt, and confirmed that Plone has a viable roadmap well beyond 2020.

Personally, I just cannot wait for a suitable project with Dexterity based content-types on a modern asyncio based http server, or the next change meet our wonderful Catalan friends! :)