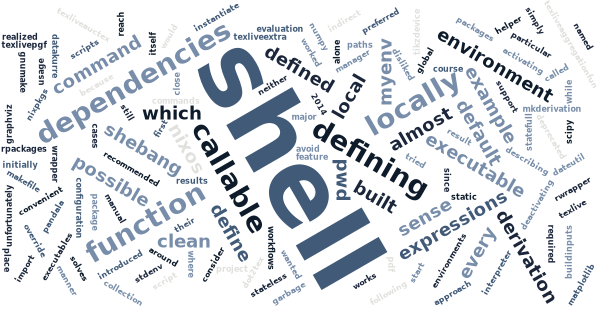 Asko Soukka
It’s almost a year, since I tried to bend Nix package manager to fit my own workflows for the first time. I disliked the recommended way of describing nix…
Nixhttps://fed.brid.gy/https://fediverse.pandala.org/July 07, 2015

It’s almost a year, since I tried to bend Nix package manager to fit my own workflows for the first time. I disliked the recommended way of describing nix environments in global configuration and activating and deactivating them in statefull way. Back then, I worked my way around by defining a wrapper to make local nix-expressions callable executables.

Nix 1.9 introduced shebang support to use Nix-built interpreter in callable scripts. This alone is a major new feature and solves most of my use cases, where I wanted to define required Nix-dependencies locally, as close to their usage as possible.

Still, I do have a one more use case: For example, want to run make with an environment, which has locally defined Nix-built dependencies. Because the make in this particular example results just a static PDF file, it does not make sense to make that project into a Nix derivation itself. (Neither does it make much sense to make Makefile an executable.)

Of course, I start with defining my dependencies into a Nix derivation, and to make that more convenient with nix-shell, I save that into a file called ./default.nix:

Now, I can run make in that environment in a stateless manner with:

Unfortunately, while that works, it’s a bit long command to type every time.

Initially, I would have preferred to be able to define local callable script named ./make, which was possible with my old approach. Yet, this time I realized, that I can reach almost the same result by defining the following bash function to help:

or with a garbage collection root to avoid re-evaluation the expression on every call:

With this helper in place, I can run any command from the locally defined default.nix with simply: