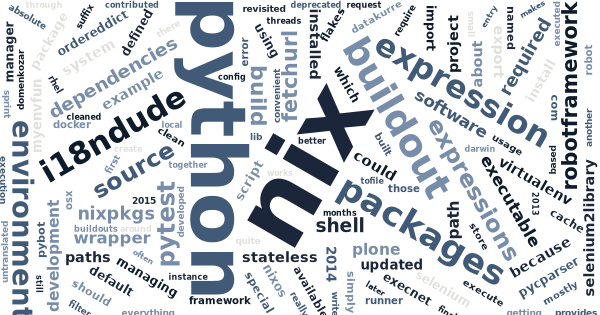 Updated 2014-09-24: I learned that in a mixed (OSX and nixpkgs) environment, one should not set LD_LIBRARY_PATH, but fix dynamic linking to use absolute paths. Yet, I refactored my wrapper to use myEnvFun when required (see the buildout example).

Updated 2014-09-22: I was wrong about, how nix-built Python environments could be used together with buildout and updated this post to reflect my experiences.

My main tools for Python based software development have been virtualenv and buildout for a long time. I’ve used virtualenv for providing isolated Python installation (separate from so often polluted system python) and buildout for managing both the required Python packages, developed packages, and supporting software (like Redis or memcached).

Basically everything still works, but:

I’ve also using quite a bit of Vagrant and Docker, but, because I’m mostly working on Mac, those require a VM, which makes them much less convenient.

I believe, I heard about Nix package manager from Rok at the first time at Barcelona Plone Testing Sprint in the early 2013. It sounded a bit esoteric and complex back then, but after about about twenty months of more virtualenvs, buildouts, Vagrantfiles, Docker containers and puppet manifests… not so much anymore.

Currently, outside NixOS, I understand Nix as

From my own experience, the easiest way to get familiar with Nix is to follow Domen’s blog post about getting started with Nix package manager. But to really make it a new tool to your toolbox, you should learn to write your own Nix expressions.

Even the the most common way to use the Nix package manager is to install Nix expressions into your current environment with nix-env, the expressions can also be used without really installing them, in a quite stateless way.

I’m not sure how proper use of Nix this is, but it seems to work for me.

Let’s take a small utility software called i18ndude as an example of such software with way too frightening dependencies for any system Python. Traditionally, you could install it into a separate Python virtualenv and use it with the following steps:

With an executable Nix expression, I can call it in a stateless way with simply executing the expression:

Maybe even better, I can install the expression into my default Nix environment with

and use it like it would have been installed into my system Python in the first place (but this time without polluting it):

No more activating or deactivating virtualenvs, not to mention about needing to remember their names or locations.

For the most common Python softare, it’s not required to write your own expression, but you could simply install the contributed expressions directly from Nix packages repository.

The easiest way to check for existing expressions from nixpkgs Python packages seems to be grepping the package list with nix-env -qaP \*|grep something.

If you’d like to see more packages available by default, you can contribute them to upstream with a simple pull request.

Anyway, since i18ndude was not yet available in time of writing (although, most of its dependencies were), this is how my expression for it looked like:

Of course, Nix expressions are not executable by default. To get them work as I wanted, I had to create tiny wrapper script to be used as the hash-bang line #!/usr/bin/env nix-exec of executable expressions.

The script simply calls nix-build and then the named executable from the build output directory (with some standard environment variables set). To put it another way, the wrapper script translates the following command:

It’s not required to suffix the expressions fiels with .nix, but they could also be named without suffix to look more like real commands.

The wrapper script itself, of course, can be installed from a Nix expression into your default Nix environment with nix-env -i -f filename.nix:

The wrapper does execute the expression defined command in a fully clean environment (the only isolation is the one myEnvFun provides), but mostly prepends everything defined by the expression into its surrounding execution environment (so that its paths are preferred over the versions in the current environment).

A mostly positive side effect from using Nix expressions like this (only building them, but not installing them into any environment) is that they can be cleaned (from the disk) anytime with simply:

Update 2014-09-24: The example was updated to use myEnvFun to simplify the wrapper script.

Update 2014-09-22: I originally covered Nix expressions with buildout as an example of replacing Python virtualenvs with Nix. Unfortunately, because of some buildout limitations that didn’t work out as I expected…

A very special case of Python development environment is the one with buildout, which is required e.g. for all development with Plone.

When using Nix expressions with buildout, there is a one very special limitation: buildout does not support any additional Python packages installed into your Nix expression based environment.

That’s because buildout sees Nix defined Python as a system Python, and buildout does its best to prevent any extra packages installed into system Python being available for the buildout by default.

An additional issue for buildout is that the extra Python packages defined in Nix expression are not installed directly into under the Python installation, but are made available only when that Python is executed through a specialc Nix generated wrapper.

But to cut this short, here’s an example executable Nix expression, which could be used as a Plone-compatible Python environment. It includes a clean Python installation with some additional (non-Python) libraries required by Plone buildout to be able to compile a few special Python packages (like Pillow, lxml and python-ldap):

With this Nix expression named as an executable ./python.nix, it could be used to execute buildout’s bootstrap, buildout and eventually launching the Plone site like:

I must agree that this is not as convenient as it should be, because each command (bootstrap, buildout and the final buildout generated script) must be executed explicitly using our executable Nix expression defining the required Python-environment.

Also, probably because my wrapper does not completely isolate the Nix expression call from its surrounding environment, sometimes it’s required to call the buildout with -S given for the Python expression, like ./python.nix -S bin/buildout (otherwise buildout does not find it’s own bootstrapped installation).

On the other hand, this approach defines the execution environment explicitly and statelessly for each call.

P.S. Because I’m working with RHEL systems, it’s nice to use Python with similar configuration with those. With Nix, it’s easy to define local overrides for existing packages (nixpkgs derivations) there’s a special function with only the required configuration changes. The following ~/.nixpkgs/config.nix-example configures Python with similar unicode flag to RHEL’s native Python:

Updated 2014-09-24: Because of OSX, I had to fix openldap expression to fix link one library with absolute path to not allow it to resolve an OSX library instead of the Nix built one.

In test driven development, the whole development environment can be built just around the selected test runner.

Here’s an example Nix expression, which saved as an executable file called ./py.test can be used to execute pytest test runner with a couple of selected plugins and all the dependencies required by the tested software in question:

In other words, this expression could work as a stateless environment for developing the product in question:

And, once the development is completed, an another expression could be defined for using the developed product.

Finally, as a bonus, here’s an expression, which configures a Python environment with Robot Framework and its Selenium2Library with PhantomJS:

Since you may need differently configured Robot Framework installations (with different add-on keyword libraries installed) for different projects, this should be a good fit as an executable Nix expression: