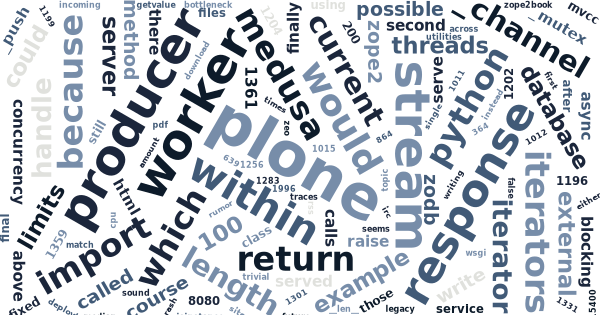 Asko Soukka
This post may contain traces of legacy Zope2 and Python 2.x. Some may think that Plone is bad in concurrency, because it’s not common to deployt it with WSGI…
AsyncAsyncorePlonePythonhttps://fed.brid.gy/https://fediverse.pandala.org/May 04, 2014

This post may contain traces of legacy Zope2 and Python 2.x.

Some may think that Plone is bad in concurrency, because it’s not common to deployt it with WSGI, but run it on top of a barely known last millennium asynchronous HTTP server called Medusa.

See, The out-of-the-box installation of Plone launches with only a single asynchronous HTTP server with just two fixed long-running worker threads. And it’s way too easy to write custom code to keep those worker threads busy (for example, by with writing blocking calls to external services), effectively resulting denial of service for rest of the incoming requests

Well, as far as I know, the real bottleneck is not Medusa, but the way how ZODB database connections work. It seems that to optimize the database connection related caches, ZODB is best used with fixed amount of concurrent worker threads, and one dedicated database connection per thread. Finally, MVCC in ZODB limits each thread can serve only one request at time.

In practice, of course, Plone-sites use ZEO-clustering (and replication) to overcome the limitations described above.

Back to the topic (with a disclaimer). The methods described in this blog post have not been battle tested yet and they may turn out to be bad ideas. Still, it’s been fun to figure out how our old asynchronous friend, Medusa, could be used to serve more concurrent request in certain special cases.

If you have been working with Plone long enough, you must have heard the rumor that blobs, which basically means files and images, are served from the filesystem in some special non-blocking way.

So, when someone downloads a file from Plone, the current worker thread only initiates the download and can then continue to serve the next request. The actually file is left to be served asynchronously by the main thread.

This is possible because of a ZPublisher feature called stream iterators (search IStreamIterator interface and its implementations in Zope2 and plone.app.blobs). Stream iterators are basically a way to postpone I/O-bound operations into the main thread’s asyncore loop through a special Medusa-level producer object.

And because stream iterators are consumed only within the main thread, they come with some very strict limitations:

Because of these limitations, the stream iterators, as such, are usable only for the purpose they have been made for: streaming files or similar immediately available buffers.

If you have a local Plone instance running somewhere, you can add the following proof-of-concept code and its slow_ok-method into a new External Method (also available as a gist):

The above code example simulates a trivial post-processing with time.sleep, but it should apply for anything from building a PDF from the extracted data to calling an external web service before returning the final response.

An out-of-the-box Plone instance can handle only two (2) concurrent calls to a method, which would take one (1) second to complete.

In the above code, however, the post-processing could be delegated to a completely new thread, freeing the Zope worker thread to continue to handle the next request. Because of that, we can get much much better concurrency:

To go experimenting even further, what if you could do similar non-blocking asynchronous processing in the middle of a request? For example, to free the current Zope working thread while fetching a missing or outdated RSS feed in a separate thread and only then continue to render the final response.

An interesting side effect of using streaming iterators is that they allow you to inject code into the main thread’s asynchronous loop. And when you are there, it’s even possible to queue completely new request for ZPublisher to handle.

I’m not sure yet, how good or bad idea this would be, but I’ve been tinkering with a proof-of-concept implementation called experimental.promises to figure it out.

Of course, there are limits and issues to be aware of. Handling the same request twice is not free, which makes approach effective only when some significant processing can be moved to be done outside the worker threads. Also, because there may be other request between the first and the second pass (freeing the worker to handle other request is the whole point), the database may change between the passes (kind of breaking the MVCC promise). Finally, currently it’s possible write the code always set new promises and end into never ending loop.

Anyway, if you are interested to try out these approaches (at your own risk, of course), feel free to ask more via Twitter or IRC.