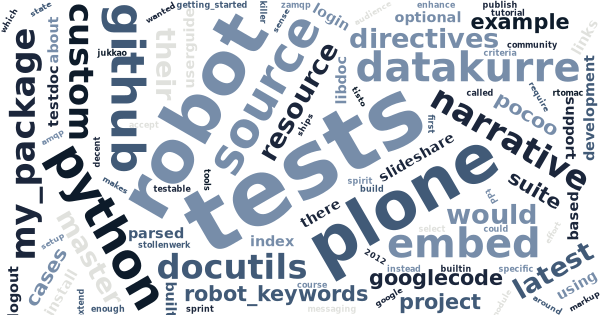 Asko Soukka
Robot Framework ships with decent tools for generating reference documentation out of your robot keywords and test data (see libdoc and testdoc). Yet, when Timo…
PlonePythonRobot FrameworkSphinxTestinghttps://fed.brid.gy/https://fediverse.pandala.org/October 22, 2012

Robot Framework ships with decent tools for generating reference documentation out of your robot keywords and test data (see libdoc and testdoc). Yet, when Timo Stollenwerk presented Robot Framework as part of his is talk about TDD at PloneConf 2012, the first question from the audience was, would you be able to include tests as examples into narrative documentation of your package.

I’m not sure, how much effort would it require to make Robot Framework support testable documentation (similarly to doctest-module), or would it even make any sense…

The other way around, however, is easy.

Sphinx is the current state-of-art document generation tool of the Python community. Sphinx is based on Docutils, which makes it very easy to extend its reStructuredText-markup with custom directives.

There’s also a real killer app for it: ReadTheDocs.

So, in the spirit autodoc extension for Sphinx, I wanted to use my sprint time at the PloneConf for starting up a new Sphinx extension for embedding Robot Framework tests and user keywords into narrative package documentation.

This work is now available as: sphinxcontrib-robotdoc.

When test cases or user keywords contain documentation, it gets parsed with something called nested Docutils parser. This supports also links between keywords and links from narrative to keywords as long as both the link and its target are embedded onto the same Sphinx page.

If you are new to ReadTheDocs, you should start with their Getting Started -guide.

ReadTheDocs does support custom Sphinx-plugins (the ones that are not distributed with Sphinx’s main distribution), but there are a few things to know about it:

Done. Now, the next ReadTheDocs-build for your documentation should be able to use your custom Sphinx-plugin, e.g. sphinxcontrib-robotdoc.

With a full example

At the PloneConf, I had a presentation with Jukka Ojaniemi on doing AMQP based system integrations for Plone. For the presentation, I wrote a minimal publish-subscribe -example for Plone containing also a pair of acceptance tests written with Robot Framework.

and, finally, the results at ReadTheDocs.

So, if you do acceptance driven development, shouldn’t your acceptance criteria be good enough to be embedded as examples of your product’s usage into its narrative documentation?

Actually, I don’t want to argue more on that… I’ll describe a real use case instead:

plone.act is the new acceptance test library for Plone and Plone add-on-developers. It is implemented as an importable resource of Robot Framework user keywords built on top of Robot Framework’s built-in keywords and Selenium2Library-keywords. Of course, it’s still far from complete.

For plone.act, we do need to write a narrative tutorial-like documentation, including descriptions of the available keywords and examples of their use in custom test cases. The best way to do this and keep it in sync with the current implementation, I believe, would be to embed the actual keywords and tests cases into the documentation.

And, I hope, we can do that with sphinxcontrib-robotdoc and enhance it a lot during the process.