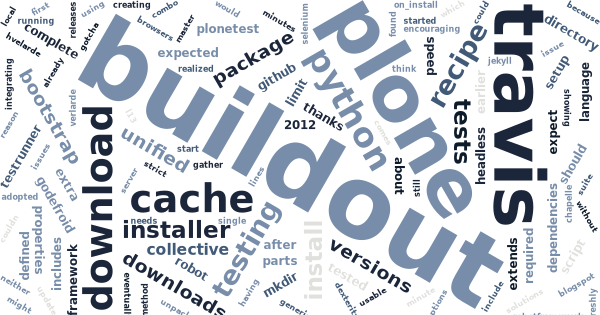 Asko Soukka
Many thanks for Héctor Verlarde for encouraging us to try out Travis CI for testing our own Plone add-ons. Also, thanks for Godefroid Chapelle for showing me…
PloneTestingTravis CIhttps://fed.brid.gy/https://fediverse.pandala.org/September 09, 2012

Many thanks for Héctor Verlarde for encouraging us to try out Travis CI for testing our own Plone add-ons. Also, thanks for Godefroid Chapelle for showing me, how to run Selenium tests on a headless server, e.g. on Travis CI.

As you may already know, the main issue in testing Plone add-ons on Travis CI is its strict 15 minute time limit on running your test suite. And as you may also know, 15 minutes is not much time for our dear buildout to gather all the required dependencies of Plone or plone.app.testing, and still run our test after the buildout.

As expected, neither did I get far without having issues with the time limit. And for some reason, I couldn’t get the earlier solutions to work for me. Eventually, I found out a new solution, surprisingly, with the help of Plone Unified Installer.

Because Plone Unified Installer comes in a single downloadable package and includes a complete buildout-cache usable also in a test buildout, I realized, that it could speed up my test buildout a lot, and it did. Yet, with Plone 4.3 shipping with Dexterity, I would expect it to speed it up even more.

Update: The method described here is adopted as part of buildout.plonetest, which includes more generic configuration to work with all Plone-versions.

Nothing special here. I expect setup.py of the tested package to include complete extras_require={'test': ... } with all the required dependencies for testing.

So, on a local machine, python bootstrap.py, bin/buildout and bin/test combo should run tests for a freshly cloned package repository just as expected.

Here’s the magic for re-using Plone Unified Installer for your test buildout:

As you might guessed, after this, buildout needs to download only the extra requirements of the tested package! Long live Plone Unified Installer!

Note, how we need to create a buildout-cache-directory for downloads as defined earlier in travis.cfg. The rest should be easy: we just do the bootstrap and run our tests with sane buildout-options, and… that’s all.

Oh, in the beginning, I mentiond about learning something important from Godefroid. Well, if you have followed me on creating zope.testrunner-compatible Robot Framework -tests with plone.app.testing, you only need to add a few extra lines to make your Robot Framework tests runnable on Travis CI:

If you think, this is cool, please, give some love for the Travis CI team!