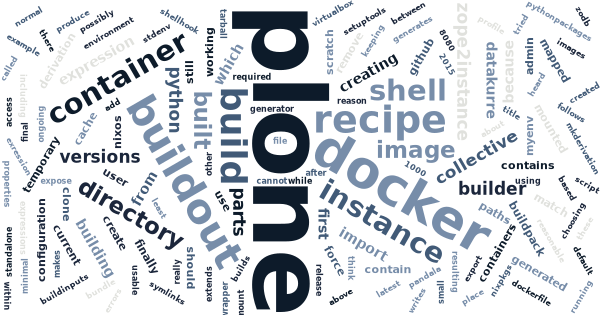 Nix makes it reasonable to build Docker containers from scratch. The resulting containers are still big (yet I heard there’s ongoing work to make Nix builds more lean), but at least you don’t need to think about choosing and keeping the base images up to date.

Next follows an example, how to make a Docker image for Plone with Nix.

At first, we need Nix expression for Plone. Here I use one built with my buildout based generator, collective.recipe.nix. It generates a few exression, including plone.nix and plone-env.nix. The first one is only really usable with nix-shell, but the other one can be used building a standalone Plone for Docker image.

To create ./plone-env.nix, I need a buildout environment in ./default.nix:

And a minimal Plone buildout using my recipe in ./buildout.cfg:

And finally produce both plone.nix and the required plone-env.nix with:

Next up is building the container with our Nix expression with the help of a builder container, which I call Nix Docker buildpack.

At first, we need to clone that:

And build the builder:

Now the builder can be used to build a tarball, which only contains the built Nix derivation Plone. Let’s copy the created plone-env.nix into the current working directory and run:

After a while, that directory should contain file called plone-env.nix.tar.gz, which only contains two directories in its root: /nix for the built derivation and /app for easy access symlinks, like /app/bin/python.

Now we need ./Dockerfile for building the final Plone image:

And finally, a Plone image can be built with

To run Plone in a container with the image built above, we still need the configuration for Plone. We can the normal buildout generated configuration, but we need to

Also, we need a small wrapper to call the Plone instance script, ./instance.py, because we cannot use the buildout generated one:

When these are in place, within the buildout directory, we should now be able to run Plone in Docker container with:

Note: When I tried this out, for some reason (possibly because VirtualBox mount with boot2docker), I had to remove ./var/filestorage/Data.fs.tmp between runs or I got errors on ZODB writes.