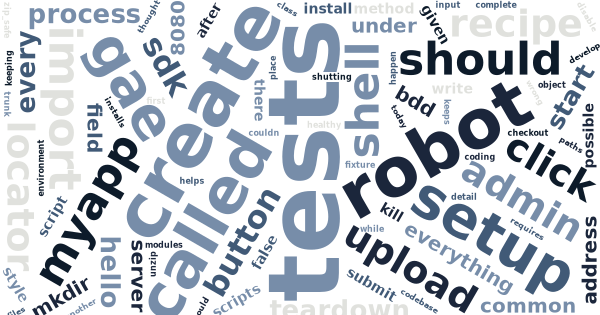 Asko Soukka
For a long time I thought that Selenium was hard to set up and tests for it were hard to write. Well, I couldn’t have been more wrong. With Robot Framework and…
Google App EnginePythonRobot FrameworkSeleniumTestinghttps://fed.brid.gy/https://fediverse.pandala.org/June 01, 2012

For a long time I thought that Selenium was hard to set up and tests for it were hard to write. Well, I couldn’t have been more wrong. With Robot Framework and robotframework-selenium2library even a BDD-style acceptance test case using Selenium can be as simple as:

Let’s see, how that’s possible for a GAE app…

I happen to like buildout for keeping my development environments for different projects clean, separated and reproduceable. Today it helps us to install and create scripts for running Robot Framework tests for our GAE app with all the required dependencies. Buildout installs everything under your project directory, so the process keeps your system Python clean and healthy.

If everything goes as planned, your project directory should now include a script bin/pybot for running Robot Framework with all the requirements in sys.path.

P.S. The above buildout provides also scripts bin/app and bin/appcfg, which allow you to start the development server or upload your app without system wide GAE SDK install. See rod.recipe.appengine for details.

For acceptance tests, it would be nice to have your GAE app running as completely as possible, but with a clean database for every test. That requires every test to have a setup method for launching your app onto background before the test and a teardown method to shut it down after the test.

Unfortunately, GAE SDK won’t ship with much support for automated acceptance test. There exists a project called gaedriver for running SDK’s development server as a Python subprocess while running the tests. Yet, because I was looking for something even simpler, eventually I ended up with something my own.

Now you should have everything ready and in place for writing acceptance tests for you app.

Of course, you should look into Robot Framework User Guide.