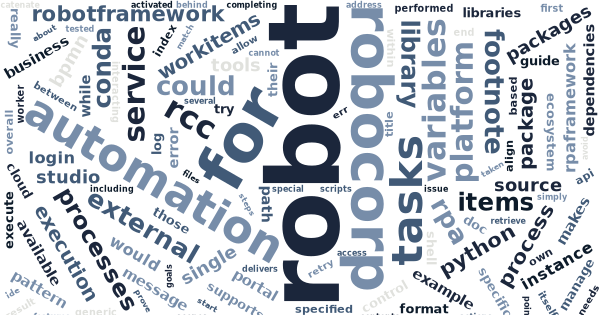 This year I’ve been tinkering mainly around Camunda Platform, the BPMN based open-source process orchestration platform of my choice [1]. My special interest has been, how Robot Framework, an open source automation framework with extensive ecosystem, seems to be an unexpected match for implementing automated tasks in BPMN processes.

But let’s start by asking OpenAI’s ChatGPT about the topic:

How would you conceptually align Camunda platform and Robot Framework so that Camunda automates the execution of BPMN defined processes, but Robot Framework is used to execute external service tasks within those processes?

For example, let’s say you have a Camunda process that involves several steps, including interfacing with an external web service to retrieve some data and then making a decision based on that data. In this case, you could use Camunda to define the overall process and manage its execution, and then use Robot Framework to automate the execution of the task that involves interfacing with the web service. This would allow Camunda to control the overall flow of the process, while Robot Framework handles the details of interfacing with the external service.

Overall, this approach would allow you to use Camunda to manage and automate your business processes, while leveraging the power of Robot Framework to automate specific tasks within those processes. This could help to improve the efficiency and reliability of your processes, and ultimately help your organization to achieve its goals.

I couldn’t agree more… but what could it really mean to integrate Robot Framework into your Camunda processes? 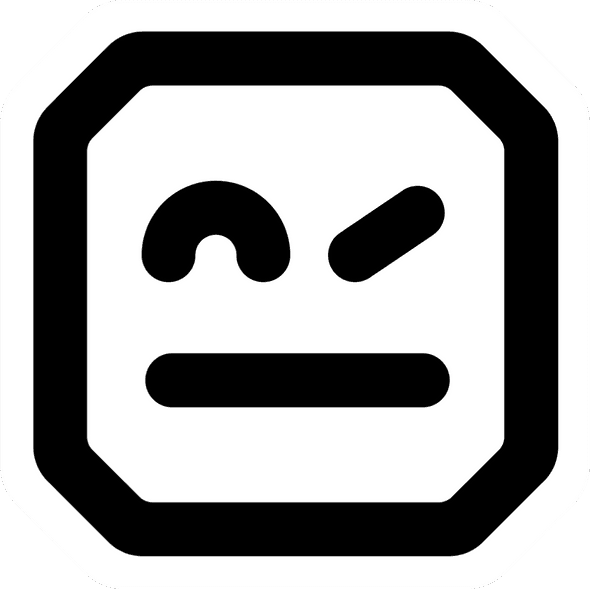 Robot Framework is a generic automation framework, which does not dictate by itself, how it should be integrated with other systems. To avoid inventing my own way, I chose to follow Robocorp’s conventions.

Camunda Platform recommends to model computer automated tasks in BPMN processes as external service tasks [2]. Therefore every automated task in Camunda is an external service task instance. When a software worker activates a such task, Camunda Platform delivers the worker a payload: a list of task variables with their values from the activated task instance. 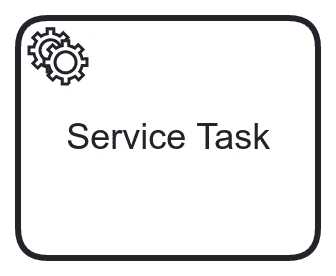 Meanwhile, Robocorp maintains RPA Framework a comprehensive and well documented collection of various automation libraries for Robot Framework and Python. RPA Framework happens to include also a library for interacting with available work items. While the default implemention is designed for Robocorp’s own cloud service only, the library does supports adapter pattern for local customization. This allows to use it as a generic keyword API for integrating Robot Framework with process orchestration: the same keywords that are used to interact with work items at Robocorp Cloud, could also be configured to work elsewhere. 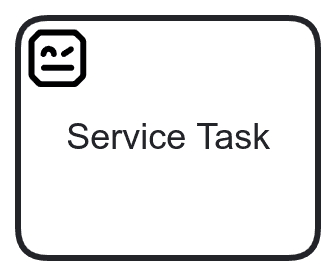 For example, this could be the simplest way to access any Camunda task instance variables from Robot Framework task code:

And this could be how to set result variables to be submitted back to Camunda when completing the task instance:

This could be, how to fail a Camunda service task in way it would be automatically retried later:

And this could be the way to throw a BPMN business error, which could then be taken care of on the business level:

To prove the point, all the examples above were copied or adapted from RPA Framework WorkItems library documentation. And to eat my own dog food, this is also how I’ve integrated Camunda Platform to Robot Framework in carrot-rcc and parrot-rcc.

When it comes to open source, developer experience is not always guaranteed. For a long time, this was also the case with Robot Framework. While Robot Framework has always has a comprehensive and maintained user guide, it was missing good beginner tools and tutorials. Shout-out to Robot Framework Foundation and Robocorp for this no longer being any issue!

At first, https://robotframework.org/ has evolved into a portal of Robot Framework news, libraries and in-browser runnable examples to give immediate taste of the framework and its ecosystem. That said, I really want to praise the efforts at Robocorp to make their developer tools and documentation free, open and generally available for all Robot Framework users. 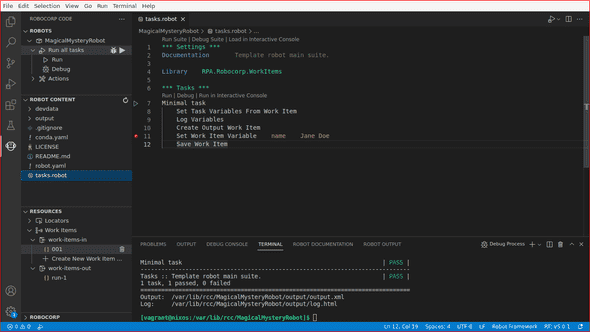 Robocorp Code supports creating new Robot Framework automation projects from templates (or scratch), developing and debugging them with modern IDE experience, and also it helps to manage their Robot Framework and Python dependencies. In addition, it allows to try those automation tasks straight from the editor, also with example work item data. 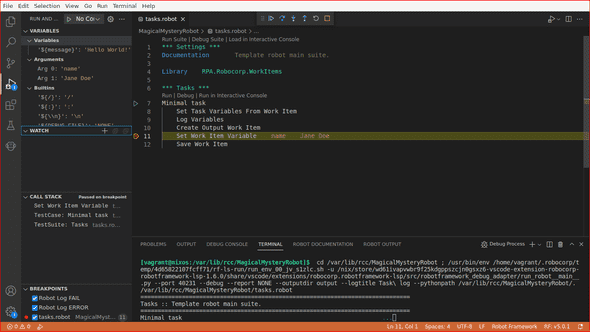 Did I mention work items? Building the integration between Camunda Platform and Robot Framework on top of the RPA Framework work items, makes it possible to benefit from all these work item related features in Robocorp tools. For example, a automation tasks could be functionally tested with local work items before trying them with a process engine. Robocorp provides and maintains also a lot of tutorials and other documentation, and is also building an automation portal with free examples, even out-of-the-box usable automation packages.

And that’s not all. Robocorp has been developing a visual editor: Automation Studio. This fall Automation studio got support for RPA Framework’s WorkItems library too and can now be used to implement compatible automation packages. 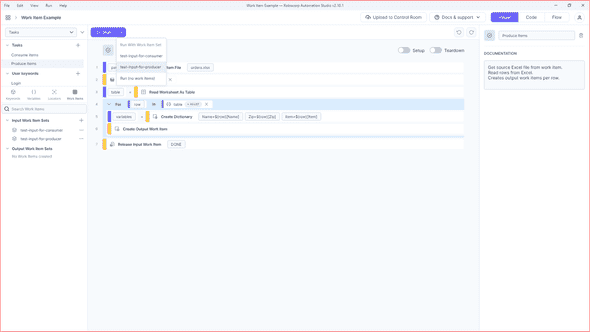 I saved the best for the last.

RCC is at the very heart of Robocorp tools for Robot Framework ecosystem. RCC is the really cool command line tool behind the scenes, and makes Robot Framework automation packages “just work”. Practically everywhere (Mac, Windows or Linux). From scratch. And it is just a single binary download.

Given a properly structured robot package, RCC prepares a runtime environment with required dependencies and then executes named automation task from the package. Dependencies are then cached for fast re-use in future runs. It supports being executed in parallel for concurrent automation, and it also provides scaffolding commands for creating and wrapping new automation code packages. Finally, it is not limited for executing just Robot Framework code, technically not even just Python…

Properly structured robot package, means just a zip file with robot.yaml and conda.yaml along the actual code. At first, robot.yaml contains all the metadata RCC needs to execute automation tasks from the package.:

The usual distribution format for RCC compatible Robot Framework package is to just package all files into a zip file, but of course, there is also a command for that:

RCC could well be the easiest way to execute Robot Framework, or even Python code in general. That’s should align pretty well with Camunda Platform for making process automation more accessible.

[1] Camunda Platform 7 is mostly open source, but Camunda Platform 8, unfortunately, is not. That said, its process engine, Zeebe, is licensed under a custom “source available” license, which makes it usable in many scenarios.

[2] See also The External Task Pattern in Camunda Platfrom 7.18 documentation. In Camunda 8.x all tasks are implemented according to this pattern.

[3] RPA Framework work item library allows iterating over multiple work items in a single Robot Framework execution, and this is also promoted in their documentation. While this is efficient use of computing resources, I have yet to find a good way to map this behavior to Camunda Platform. For now, I stand with recommending execution of only a single work item from a single task instance in a single run. And accept this as a limitation for this integration approach.