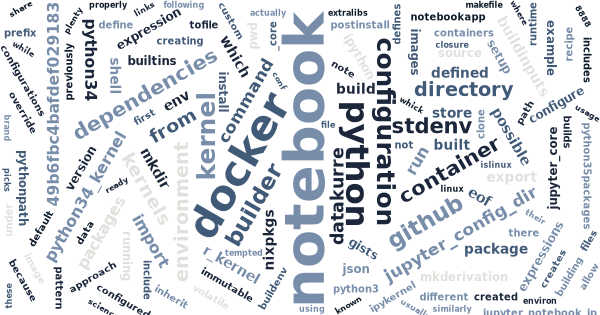 Asko Soukka
Jupyter is the new name and brand for an awesome interactive data science programming scratchpad previously known as iPython Notebook. While there are plenty of…
JupyterNixRhttps://fed.brid.gy/https://fediverse.pandala.org/November 13, 2015

Jupyter is the new name and brand for an awesome interactive data science programming scratchpad previously known as iPython Notebook. While there are plenty of pre-built Docker images available for Jupyter, for customized images, I’m tempted to use Nix.

Here I describe approach for the following gists creating

Note: Because these Jupyter notebook configurations are build with Nix, their configuration is immutable and it’s not possible for the user to install any additional packages directly from a notebook. 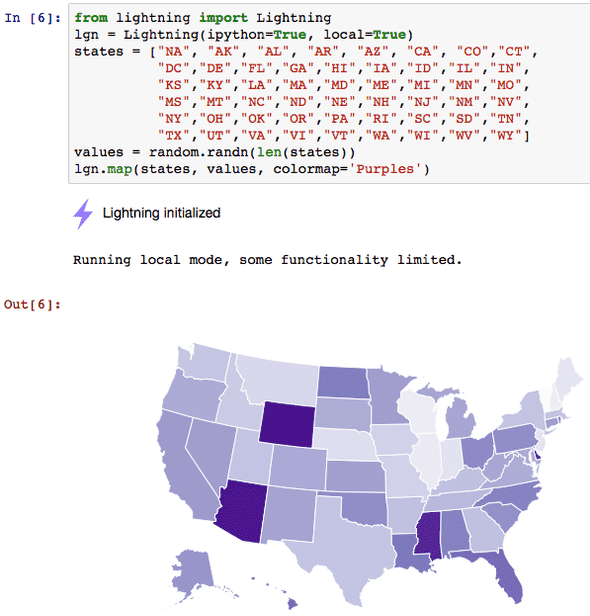 With nix-shell (unless you are on a mac):

With Docker (works also on a mac):

Now, if you are on a mac, you need to figure out the IP and port where notebook is running with:

At first, both of my Jupyter gists are based on my recipe for building Docker containers with Nix.

It builds a Docker image with Nix installation to build your Nix expressions, creates a nix store data container to store and share built Nix expressions between builds, and creates a Docker ready tarball from a built nix closure.

Then a few picks from the expressions:

To be able to run Jupyter notebook, I want to use the normal jupyter command, but a problem is that the base command is defined in a python package jupyter_core, which does not include notebook-package, which includes the actual Jupyter notebook program and its jyputer notebook subcommand. The Nix solution is to install notebook package, but enhance its install with a custom postinstall, whick links the command from jupyter_core and wraps the command to be aware of notebook and itse dependencies.

Next I want to be able to define and configure as many Jupyter kernels as I need in my notebook. This pattern first defines the kernel environment. Above that is Python 3.4 with the mandatory iPython packages and then any amount of Python packages I want to provide for the notebook.

The second part of the pattern just defines an iPython kernel configuration (usually created using jupyter kernelspec in mutable Jupyter installations) so that the kernel uses our previously defined Python 3.4 environment. The builder for actually creating the configuration file is defined an upper level of the expression so that it can easily be re-used with inherit builder;.

The next most important part is the expression to compose all the defined kernels into a compelete and immutable Jupyter configuration directory. Whitelisting kernels in configuration is required to hide the Python environment running the Jupyter notebook (because it only has the notebook dependencies and is missing all the interesting libraries). The line with c.NotebookApp.ip allows Docker to configure notebook to allow connections outside the container.

Finally, we define an buildable environment installation, which mainly includes Jupyter (command) and its configuration. On Linux a few extra dependencies are added to make Jupyter run in a Docker container. For nix-shell command the expression configures Jupyter to look configuration from the Nix built configuration directory and store volatile runtime files under the current working directory.

Environment variables are also the way to configure Jupyter to run properly in a Docker container. My Dockerfile configures Jupyter to look configuration from the directory created by my recipe for building Docker containers with Nix, and store volatile runtime files under the host directory mounted as /mnt. In my example Makefile that’s configured to be the current working directory, which is also used shown as the notebook home directory.

Note: Running Jupyter notebook in Docker container may require tini (or supervisor) to allow Jupyter spawn all the kernel processes it needs within the container.