Overview of the new Robot Framework goodies for Plone

Overview of the new Robot Framework goodies for Plone 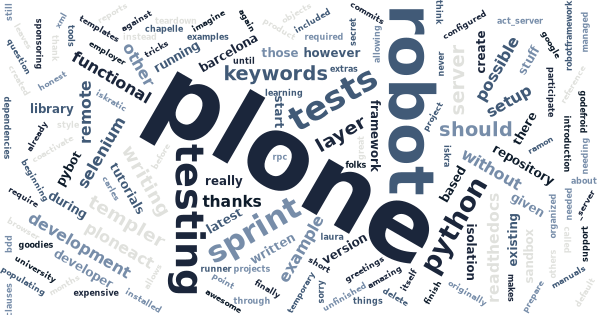 Asko Soukka
Greetings from Plone testing sprint! I had never been in Barcelona before, and to be honest, I didn’t really see much of the city yet. The sprint, however, was…
PloneRobot FrameworkSeleniumTestinghttps://fed.brid.gy/https://fediverse.pandala.org/February 11, 2013

I had never been in Barcelona before, and to be honest, I didn’t really see much of the city yet. The sprint, however, was great, fun and well organized. Thank you Ramon, Timo and iskraTIC folks! Also, thanks to my employer, University of Jyväskylä for allowing and sponsoring me to participate the sprint.

In the beginning of the sprint I gave others short introduction on writing functional Selenium test for Plone with Robot Framework. At the end of the sprint, I was already learning new robot tricks from them. Thanks Carles, Kees, Laura and Víctor. Amazing.

plone.act has now to-the-point tutorials for writing robot tests for a new (templer based) or existing add-on.

They are not reference manuals (yet), but with some good examples they should give you a good start for writing robot tests for Plone.

templer.plone (From version 1.0b4), thanks to Maik Röder, has now a new question for populating the created product with a functional robot test example.

plone.app.testing (from version 4.2.2) can now be required in your setup.py with [robot] extras to require all the needed dependencies for writing and running functional Selenium tests for Plone with robot.

plone.act repository has included a secret development server called act_server. It can start a temporary Plone site with the given testing layer configured. Instead of running tests on top if it itself, however, it just leaves the site on, and allows you to test it with any tools you can imagine (even with a browser).

The server was originally written by Godefroid Chapelle for months ago, but we finally managed to finish it to support test isolation with pybot — the default test runner installed with Robot Framework.

So, now act_server makes it possible you to run your unfinished tests over and over again with pybot against a real test layer based Plone sandbox, with test isolation, but without needing to wait for the expensive test layer setup and teardown.

In BDD-style tests it should be possible to prepare tests in Given-clauses, preferably as fast as possible (= without Selenium).

plone.act repository contains now an example on, how to create a robot remote library in Plone site during test layer setup, populate it with keywords written in Python, and then run those keywords like any other keywords in robot tests.

Because robot will call those keywords through XML-RPC, you can e.g. create and delete objects without need to think about transactions or commits by yourself.

We are not yet sure, if there’ really need for a separate package (plone.act), or should the stuff currently in plone.act be moved into existing packages, mainly into plone.testing and plone.app.testing.

plone.act will not disappear, but until we have agreed on where the robot stuff for Plone should live, it may remain only as a development sandbox. Although, you can still checkout it (e.g. with mr.developer), to use it in development and make internal releases out of it.

Of course, also many other things were completed during the sprint, but I’m sure that there will be other reports focusing on them.